Pokemon GO just dropped and we’re looking at a fun new deck that comes out of this set: Mewtwo VSTAR! The basic Mewtwo V does a plain 50 damage for a Psychic and a Colourless energy, then 160 for 2 Psychic and a Colourless, and you’re forced to move an energy from Mewtwo to one of your benched Pokemon. While the basic Mewtwo V is pretty mediocre, the VSTAR is where this deck shines. Its first attack, Psy Purge, does 90 damage times the amount of Psychic energy you discard off any of your Pokemon, up to 270 damage. Then its VSTAR Ability “Star Raid” does 120 damage to each of your opponent’s Pokemon V for just a Colourless and a Psychic energy, which is insane for cleaning up Pokemon you couldn’t knock out and take several prizes in one turn. 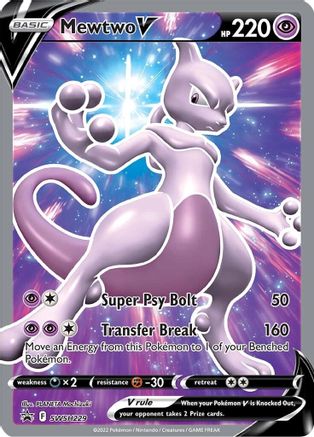 Hitting 270 damage in one turn is so close to our magic number of 280- luckily we can make use of Zigzagoon’s Headbutt Tantrum to hit for knock outs on all current V-Star Pokemon! Add in a Choice Belt and we’re hitting 310 damage with Zigzagoon, taking out Flying Pikachus, Mews, Umbreons and other VMax threats. Throw in some Scoop Up Nets to reuse Headbutt Tantrum and you have enough snipe damage to take one hit knock outs on every threat in format! Here’s the list I’m currently using:

The main problem I was running into with Mewtwo VSTAR is who to pair it with. My initial idea of Shadow Rider Calyrex VMAX proved too slow and couldn’t hit for enough damage as I didn’t have room for Scoop Up Nets, Trekking Shoes, or Zigzagoons. This deck relies on a lot of 2 or 3-ofs to make it work - Scoop Up Net is needed to hit our knock out numbers, the ball search numbers are needed to get the elusive Mewtwo VSTAR out, Energy Switch is needed to get energy off the Lunatone and onto the Mewtwo. There’s a fair amount of different items that come into play here, so we needed a partner for Mewtwo that didn’t force us to open up too many slots in the list. That’s where Solrock and Lunatone come in! 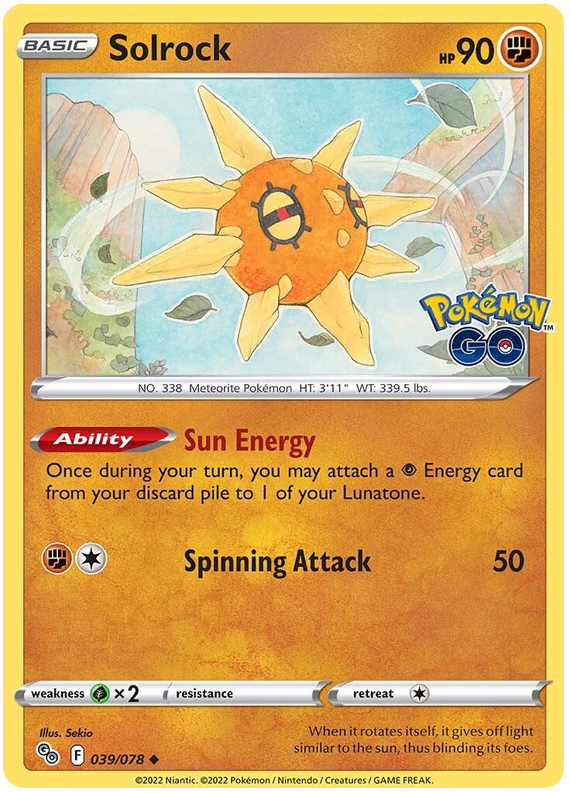 The Solrock/Lunatone pair is crucial to this deck! Lunatone is a fantastic one-prize attacker and it’s so easy to get energies on it to hit for massive numbers- “Moon Kinesis” does a base 30 damage plus 30 more for each Psychic energy attached to it. Solrock has the ability “Sun Energy” which allows you to attach a Psychic energy from your discard to a Lunatone once per turn- and this ability stacks with other Solrock you have in play! It doesn’t even have to be a benched Lunatone, so it can still be used if you start with Lunatone active.  Since we won’t be hitting for large numbers until at least our Turn 2, Lunatone isn’t a terrible opening Pokemon, with it’s Cycle Draw attack allowing you to discard a card from your hand and draw 3 cards for 1 Psychic energy. There’s great synergy back with Solrock since you can discard a Psychic energy to attach it next turn! This same theme is found in Radiant Greninja- get your energies into the discard, then attach them with Solrock or Raihan. Then, later in the game you have Moon Kinesis to take big knock-outs as you load your Lunatones up with energy. Use Scoop Up Net to reset Solrock’s Ability and buff up Lunatone’s attack even more! Just based on the attachments needed to use this attack you’ll be hitting for a minimum of 120, which can be convenient for finishing off your opponent’s active Pokemon when you don’t want to leave a 2-prize Pokemon in the active. 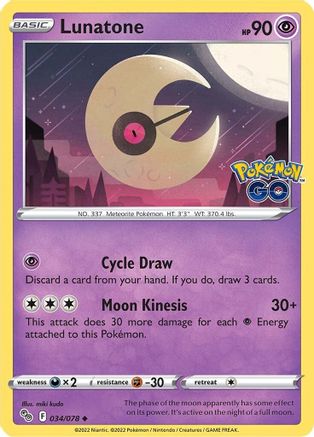 So how does Mewtwo VSTAR hold up against the main tier-1 decks you’ll come across? Pretty well, actually! While we do take a couple turns to get going, being able to hit so hard and clean up damage so effectively is a massive advantage. Instead of getting the first hit in and spending 2 hits knocking out a V-Star, we spend 2 turns and 1 hit doing the same. The prize trade works out in our favour against VMAX decks like Mew- and the Darkness weakness isn’t horribly relevant in this meta either. While you may find Darkrai decks running around they take roughly the same amount of time to actually get set up, by which time you’re just one hit KOing them anyways. And if you can’t quite get 3 energy on the Mewtwo V-Star to take out immediate knock outs, use Boss’s Orders to hit other V Pokemon for as much as you can then go back in later with the Star Raid for 120 damage on each V! This is an especially great technique against late-game prize-hate cards like Galarian Moltres and Radiant Charizard. If you know your opponent is playing either of those cards you can play around their board to set up a full 6 prize turn and avoid buffing their prize-card based attacks.

We do have a more difficult time against Palkia, but not to an unreasonable degree. Due to the fact we need both Solrock and Lunatone on the bench for our engine to work, and likely another Mewtwo set up, Palkia has an advantage if you play too recklessly. Be aware that Palkia will hit you for 240-270 with a Choice Belt each turn if you have 4 benched Pokemon. Keep your bench to 3 or less! Otherwise all they need is a Zigzagoon of their own to turn the game in their favour. Try to play conservatively to avoid letting them take a one-hit knock out- you don’t need to play down the Zigzagoon as you can take knock outs with just a Choice Band on Mewtwo.

Our ideal game plan with this deck is fairly straightforward- Mewtwo and Lunatone are your attackers, so you just need to accelerate enough energy to take consistent knock outs. While you do have the benefit of using Lunatone’s attack if you go second, I recommend choosing to go first if possible. This gives you the benefit of the first energy attachment which is more beneficial than a discarded energy, and there’s no guarantee you have an extra energy to discard to use Lunatone’s attack anyways. Since we only play 2 switch cards your best bet is still just starting with Lunatone to give yourself a turn or two buffer to get the Mewtwo V-Star set up. Lunatone only has 1 retreat cost, and discarding energy is beneficial in this deck to keep accelerating with Sun Energy. Attach energy to Mewtwo, accelerate energy to Lunatone, energy switch onto Mewtwo, evolve, attach again and you’re ready to swing for big knock outs! If your Mewtwo is knocked out, go back in with the Lunatone for a knock out and force your opponent to take 7 prizes to take the game. Between our Professor’s Research’s, Trekking Shoes, Crobat V, Marnie and Greninja we have enough resources to dig through the deck and find what we need to get set up and keep swinging!

What do you think of Mewtwo VSTAR? Build it and see how you like it! It’s a great deck to get started with as the combos aren’t horribly difficult to pull off, and you can reliably clean up any mistakes later in the game. For more advanced players, the skill ceiling allows interesting plays with attacking various Pokemon to set up a checkmate late game and various items to pull off surprise attacks. You can go from a lone Mewtwo V with no energy on it to hitting 270 damage in one turn with Training Court, Solrock/ Lunatone, Raihan and Energy Switch- a great way to catch an unsuspecting opponent off guard! This is a crazy fun deck to play and it’s so nice to have some powerful one-prize attackers and a competitive Mewtwo in format!